Home ABOUT Protected: History The History of the Shipyard Women’s Club

The History of the Shipyard Women’s Club

The History of the Shipyard Women’s Club

From a small group of five women sitting around a Mah Jongg table in November, 2004, the concept of a Shipyard Women’s Club was formed. Margaret Zabawa, the hostess for the game, asked her four friends playing (Pat Foley, Jackie Hendricks, Marcy Wallis, and Helen Xenakis) if they would be interested in forming a women’s club in the plantation . The purpose of the club would be to meet and socialize with other women in our community, identify and share mutual interests and resources, lend support to neighbors, and enjoy programs and social events. These five women were overwhelmingly enthusiastic about the idea and became The Founding Mothers of the Shipyard Women’s Club.

With teamwork, spirit, and a lot of hard work, the group began the process of bringing their concept to life. 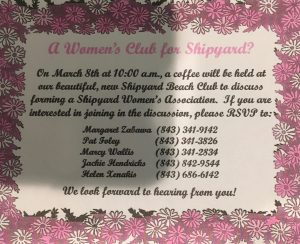 They developed a postcard for mailing to residents, which was generously printed by Shipyard GM Sally Warren, announcing the first meeting. The initial meeting was held at the newly-completed Beach Club at 10:00 a.m. on March 8, 2005. (Ironically, this date was also International Women’s Day – a very positive omen). Thirty-seven women attended this meeting, exceeding the Founding Mothers expectations.

By-laws were formulated and approved by the group. Dues were set at $10 per year. It was decided that the club would meet on the second and fourth Tuesday of each month – September through May.

A questionnaire determined the interests of the members, which included women’s health issues, gardening, a book club, and water aerobics. A seed of an idea had taken root.

Within a very short time, membership grew to 51 women strong. The first season of the Shipyard Women’s Club concluded with a Mad Hatters Tea Party on May 26. The club adjoined for the summer months reconvening in September.

At the first meeting in the Fall, 2005, membership in the club had grown to 64 members. The club published a quarterly newsletter, edited by one of its early members, Linda Pastore.

Another one of the club’s early members, Theresa McLaughlin (now deceased), wrote the lyrics for a club song “Women in Time.” ( Women-In-Time song words ).  The song captured the essence of the club’s mantra:

Women in Time standing together,

Part of a line extending forever,

We are all Women in Time.

Later, another member and song writer, Joan Maute , put the lyrics to music.

Over the years, Shipyard Women’s Club has been fortunate to have strong leaders. Past Presidents include:

A perpetual plaque hangs in the Beach Club with the names and dates of service for all past presidents.

In 2019, the Shipyard Women’s Club has grown to more than 150 members. There are 10 permanent committees, some of which remain from the club’s earliest days, like Book Club and Maj Jongg. The Program Committee is the heart of the organization and plans speakers, demonstrations, and activities for the meetings. Some of the programs have included speakers from The Greenery, chefs from Michael Anthony’s Restaurants, aestheticians from Faces Day Spa, designers from Branches, a Fashion Show by So Sandra and many more. There are also two evening dinner meetings during the year and a Beach Party ends the current season in May. Members also meet for Lunch Bunch at a local restaurant once a month. Interest Groups have expanded. Any member may suggest an Interest Group as long as she chairs and plans the activity. Some of the Interest Groups include kayaking, golf, biking, a bus trip to the zoo in Columbia, and a bus trip to Charleston.

2010: The club published a cookbook with recipes submitted by members. Local artist and Shipyard resident, Barry Horowitz, designed the cover for the cookbook.

. Proceeds from the sale of the cookbook were donated to local charities.

2014: In late Fall, the club voted to donate a bench to Shipyard. A committee was formed to find a location in the plantation. The bench was placed at the Circle near Shipyard’s main gate in front of the lagoon.